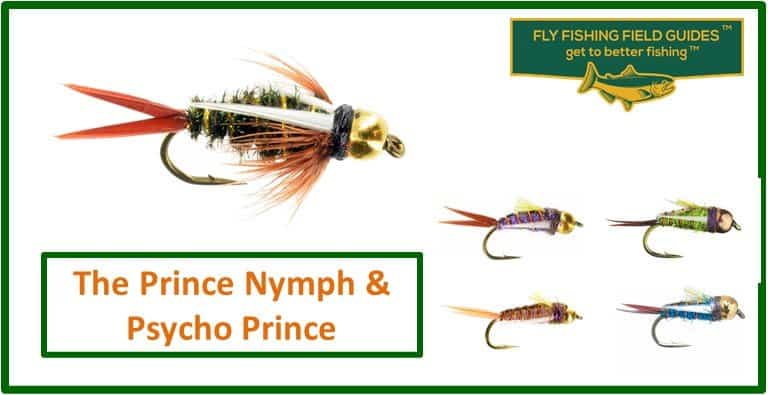 The Prince nymph has a distinctive pattern with several attractor elements that at the same time seem natural.  Or dress it up in purple to get the psycho (killer) prince nymph.  In any form, this nymph is hard for trout to resist.

Our Motto: Get You To Better Fishing! TM

1. About The Prince Nymph

The Prince Nymph, especially the bead head prince, is one of the most-used attractor flies on the planet.  It has a distinctive pattern with several attractor elements that at the same time seem natural – gold ribbing, bright white biots, soft-hackle-like appearance, and bright bead.  All together, this attractor is hard for trout to resist.  Many anglers carry the Prince in multiple sizes, with and without bead head. 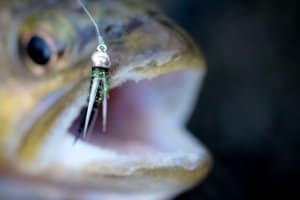 The Prince originated with the Minnesota brothers Don and Dick Olson, back in the 1930’s no less.  Back then it was called the Forked Tail Nymph.  It was popularized thereafter by western angler Doug Prince, whose name stuck with the fly.   The Price has become one of the most effective and widely used patterns ever created.

A close cousin to the Prince is the Psycho Prince, also known as the Electric Prince.  Just add purple, and “wha-la” you have the Psycho Prince.  No one knows why purple works, but just like the Purple Haze and the Purple Adams, it just does.  Like “psycho killer” effective. 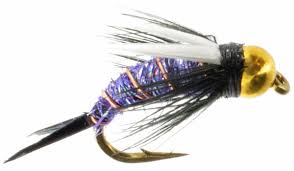 The Psycho Prince takes the attractor features of the regular prince to another level, by adding the intriguing purple color to the already attractive gold ribbing, bright white biots, bead head, and soft hackle like appearance.  And of course, additional colors patterns have evolved including dirty pink, green (thought by some to emulate a caddis nymph), black, light blue, and others.  For these variants, most of the fly is unchanged, except for the underlying body color.

Fish the Prince exactly as you would a natural nymph imitation, using the following techniques:

For fly tying, this is an lower-intermediate level fly.  The tying skills and materials are straightforward, but be sure to pay close attention to the position and proportions of the tail and biots.  As a smaller fly, it has less room for error than the larger attractors and streamers.

It requires a range of skills and several different materials, so for beginners is a good one to challenge yourself to move to intermediate level.  For experts, there are a few variations to consider (especially different color psycho patterns), but this fly is mostly one to tie a bunch in different sizes to be ready for stream-side and save yourself a little money instead of purchasing.

Here’s the basic pattern, which is universally used or close to it by most fly shops (in order materials are needed):

And of course we want you to have the Psycho Prince recipe as well, mostly the same as above except as noted:

In all likelihood, you may already have some or all of the materials needed to tie a Prince Nymph and its variations.  In case you need to fill in any gaps, here are several sources we recommend for quality materials, listed in the order you need them to tie the Prince.  If we didn’t find or don’t recommend a particular material from a particular source, we’ve greyed out that option.

Aside from the psycho / electric variation described above, try these:

To see all photos in the gallery, use the right/left arrows to scroll: 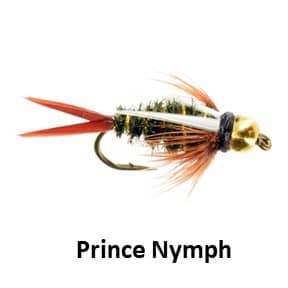 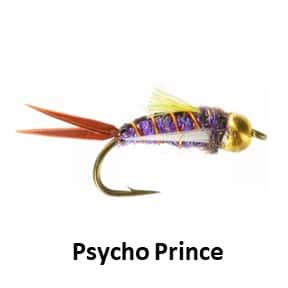 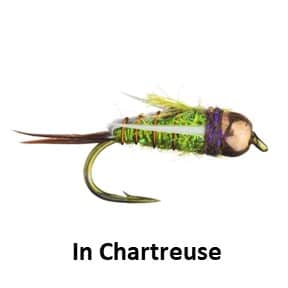 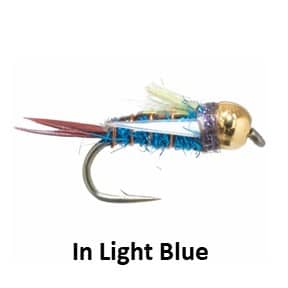 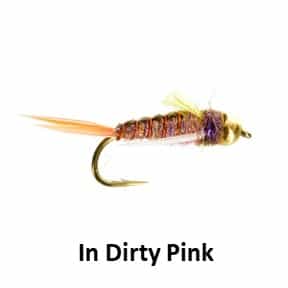 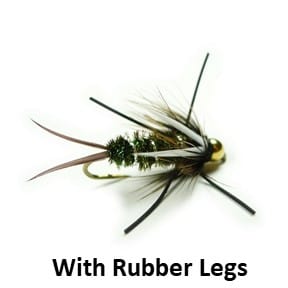 7. How To Tie The Prince Nymph

For a great close-up step-through of how to tie the Prince Nymph, check out this quality video by Charlie Craven.  To tie the psycho nymph, follow the same pattern just with materials per the recipe card above.

If you prefer to purchase, here are a couple options for you, first for the traditional prince:

And for the Psycho Prince:

The Yellow Humpy
Scroll to top